Creating is a learning process 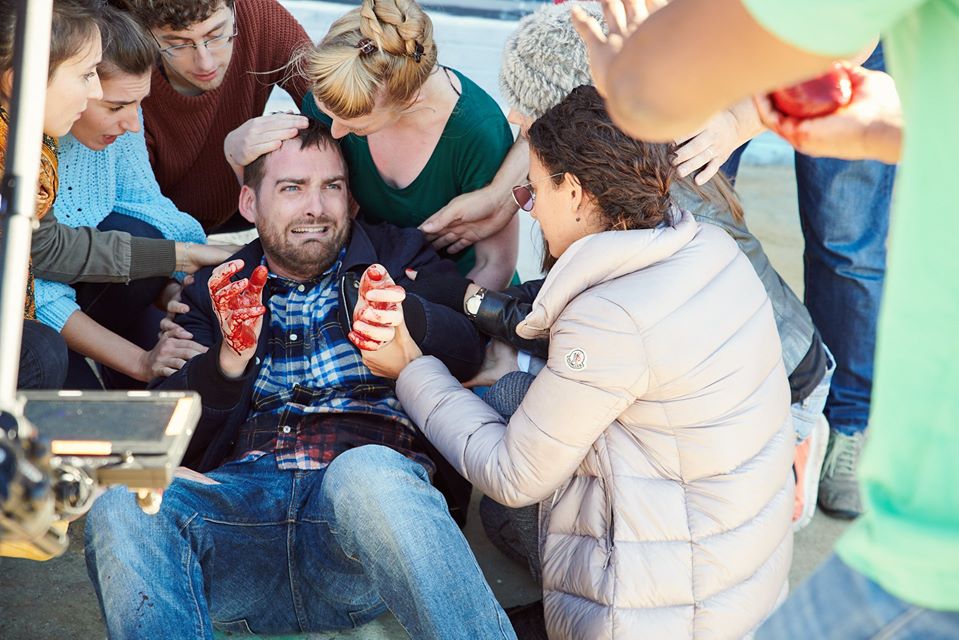 “The day your creative act becomes an intellectual one, it turns into a burden.”

Allow me to introduce Charles Meunier – French actor, writer, producer, lover of puns and artistic creation. Charles has recently wrapped his latest short film, and is preparing for a season of short film festivals across France, Romania and the UK with “34 jours, 18 heures” (“34 days, 18 hours”).

Number one: Don’t wait for it – “The knife of Doom is hanging above your head.“

Number two: Learn to be mindful – “it’s always about the next project, the feeling of “I should be doing something”. Ultimately you bottle everything up making it far worse for yourself.”

Writing is a learning process… so is Accepting.

Upon arriving in the UK, Charles hit a rough patch. He confided in a friend, Hélène, what was going on inside his head. She encouraged him to pick up a pen and lay it all out on paper. Using that time of uncertainty and imbalance to create:

“I had just arrived in London, struggling to find work in my industry as all my contacts were in Paris. In the past, I didn’t really look for work. If an opportunity or a job came to me, I would seize it. Over two years, writing helped me as I was holding myself accountable in my writing both mentally and physically. After those two years, I held an actual written text in my hands.” It was the foundation of the short film created with Hélène Schweitzer, which would later on be selected for 8 festivals across Europe.

“Every day I’d get out of bed, force myself to write so I could say “I’ve done something”. But after a year, year and a half of doing so I overdosed on it. I couldn’t do it anymore.“

A feeling I am oh too familiar with. You know you’re probably hitting a wall when you have to drag yourself to your desk and get zero joy out of it. And in that case, what do you do? What if you thought it was exactly the one thing you were meant to do? Perhaps you thought wrongly – and it’s ok. Accepting isn’t failing; it’s growing.

“I don’t even think that I was moulded to write like this. But as we say in French: C’est comme tout, ça s’apprend. It’s like everything else: it’s a learning process.

I would re-write, and re-write again and again. And after a while, it was the same characters, stories, the same everything. I told Hélène: I can’t do this anymore. I just can’t.

She just said: Ok. Don’t worry, I’m taking over. Whenever you feel ready, get back to it.”

An old friend, family member, teacher, mentor… If you’re hitting a wall, reach out. Find someone who will listen to your message and take a little of the burden from your shoulders. This is the creative support Hélène provided Charles with.

“My friend taught me what writing is about: how each character has its own rhythm, its own vocabulary, language and thought. Something she had learned through her own writing adventure. And then also what happens when you put these two characters together.

We all have our own way of writing: I would focus on the concept, the story close to my heart and push it to a point where it didn’t feel it was connected to me in any shape or form. Whereas my friend would start off with elements that had nothing to do with her, elements and characters that she’d never experienced, but gradually made them her own. And they resemble her more as a result.”

Creation: A form of Release

“Creating is fun. This writing period did me an awful lot of good. But it also led me to realise it wasn’t for me. It stopped being a pleasure after some time. This is when you know you’re not on the right track yet: I was intellectualising the act of writing and the written result.”

The day your creative act becomes an intellectual one, it turns into a burden. A heavy weight that seems harder to lift every day. You’re slowly destroying what once gave you drive. And it’s ok – it just means you need to find something else to stimulate your creativity again. And that’s what Charles did: he’ll write the occasional skit if the theme or characters animates him from within. But he’s steered away from the written path.

“Producing gives me a lot more satisfaction; You are the “”Maître du Jeu”, the Game Master”. Everything lies on your shoulders: it’s a pleasant feeling to know that you’re the person on whom others can rely on. It’s closer to the type of person I am. Who I try to be. If something occurs on set and Plan A isn’t coming together – find a Plan B. Keep the peace and good humour. “

So if you feel you’re hitting rock bottom, if the joy has left your creative process: take a break, find support, go outside, try and experience other things. You’ll find your path soon enough.

34 Days, 18 hours was recognised internationally by the Short-Film Industry, and is now available online for all to see!